Irish History from the heart of Dublin City.

Michael Collins and members of the Irish Republican Brotherhood during the Irish War of Independence were regulars to the Wicklow Hotel where Mary’s bar now sits.

Michael Collins was an Irish revolutionary leader, politician and Government Minister. He was a key figure in bringing the British Empire to a standstill as a result of his successful ‘Guerrilla Warfare’ tactics during the War of Independence.

In October of 1921, Collins travelled to London to represent the Irish government in peace talks with the British government.

Negotiations ended with an offer of a 26 County Republic of Ireland being formed, with 6 counties in Northern Ireland to be left under British Rule, which resulted in civil war in Ireland.

The Wicklow Hotel was a regular meeting point and place of leisure for Michael Collins and his associates who frequented the hotel for midday dinner or evening drinks, where all the staff knew them.

On the 28th of January 1921, the head porter of the Wicklow Hotel was shot dead in the hallway of the hotel. All eye witness statements led to Collins and his men being behind the execution.

But why would Collins be involved in the shooting of head porter Doran? Because Collins and his men had been informed that Doran was also working as a spy for the British, providing information to the Deputy Chief of British Intelligence in Ireland, Colonel Hill Dillon.

Joseph Dolan, a notorious member of the squad from Co Dublin, recalls the events at Wicklow St. 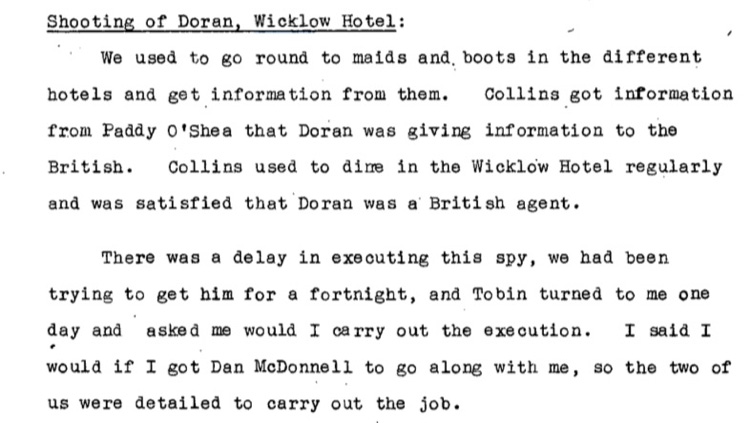 The death of Doran wasn’t the only piece of Irish history to take place here. A shooting in March of 1920 took place just outside of Mary’s on Wicklow Street, again involving a spy who was suspect of working for Colonel Hill Dillon, Private Brian Fergus Molloy. 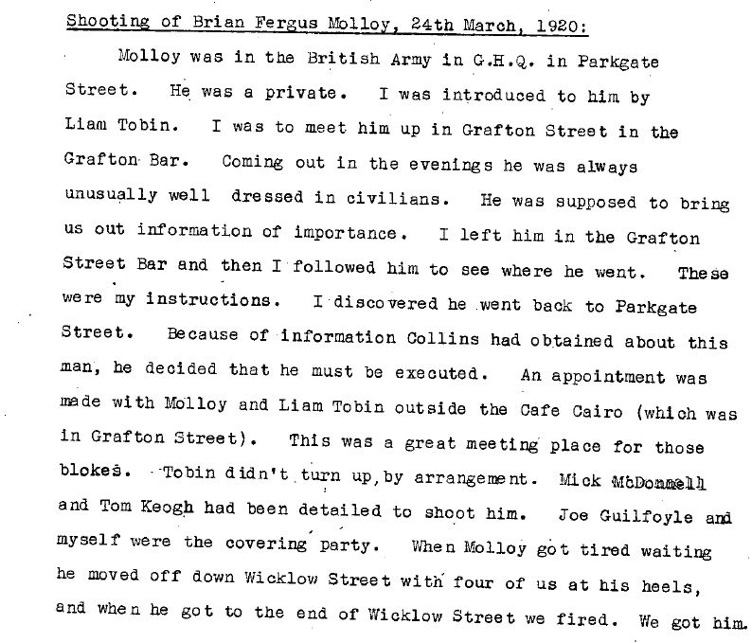 All of this information has been extracted from original witness statement reports and has been further supported with online sources.

We are always interested in hearing more information about this period in time. If you have any questions or would like to share any stories with us, it would be greatly appreciated.